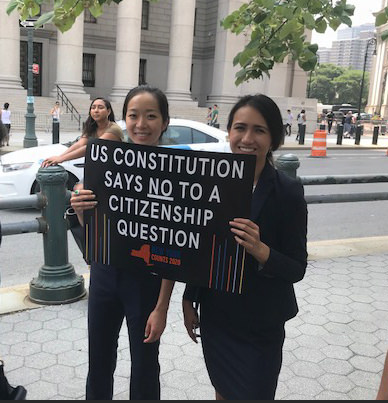 Every ten years, the Census Bureau seeks to contact every person living in the United States to get an accurate count of the nation’s population. Census questionnaires are mailed to all U.S. households, and if they are not returned, a census worker visits the address to gather data through in-person interviews. This Census information is required to be kept confidential and must not be disclosed for 72 years.

In 2010, AALDEF’s Census Project was a multi-faceted program utilizing community education, trainings, advocacy and legal support to ensure that Asian Americans were accurately counted in the decennial event.

In 2000, AALDEF prevailed on important policy issues that affected the nation, such as a legal opinion ensuring the confidentiality of census information and a moratorium on immigration raids during the census. In 2010, AALDEF has again presented the concerns of Asian Americans to top census officials and policymakers in Washington, DC and Census Bureau Regional Directors.

Next Steps
The 2020 Census will have critical impacts on the Asian American community, now the fastest growing racial minority group in the United States. In addition to the allocation of federal resources, 2020 Census data will be used to create new congressional, state, and local redistricting plans, which could provide Asian Americans with better opportunities to elect candidates of their choice. The Census Bureau will also release new data that may require new jurisdictions to provide language assistance and translated voting materials for Asian American citizens with limited English proficiency under Section 203 of the Voting Rights Act..

On August 1, 2018, AALDEF submitted comments to the Census Bureau, calling for removal of an untested question on citizenship in the 2020 Census form that would deter participation by Asian Americans and other immigrant families.