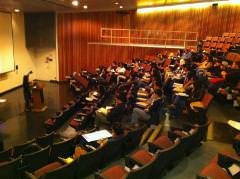 “We support the current law that race can be one of many factors colleges consider to attain campus diversity,” said Margaret Fung, Executive Director of the Asian American Legal Defense and Education Fund (AALDEF), which announced that it will be filing an amicus brief in Fisher, urging the Supreme Court to uphold UT-Austin’s race-conscious policies. “We believe the Asian American community continues to support policies that promote equal educational opportunity.”

The APAHE paper cites a Voter News Service/Los Angeles Times poll which found that a majority of Asian Americans demonstrated support for race-conscious admissions policies by rejecting Proposition 209 in California, a measure that prohibited public universities from considering race in admissions: “Polls by the Voter News Service/L.A. Times and the Field Institute reveal that among Asian American voters, support for Prop 209 was only in the range of 39% to 44%.” AALDEF’s exit polls also found that 75% of Asian American voters in Michigan rejected Michigan’s Proposal 2, a similar state referendum seeking to ban race-conscious policies.

Given this data’s consistency, the APAHE paper finds “frankly impossible” the claim of political action group 80-20 National Education Foundation (80-20) that Asian American respondents oppose affirmative action by a ratio of 52:1. 80-20, which filed its own amicus brief opposing race-conscious policies in Fisher, bases these claims on a web survey it sponsored. Ethical and research flaws leading to the lopsided results – including 80-20’s political bias and “unethical practice” of publicizing the full name and race of all participants on its website — are detailed in both papers.

According to the Federal Judicial Center’s (the research and education agency for the federal courts) Reference Manual on Scientific Evidence cited in the APAHE paper, “self-selected pseudosurveys resemble reader polls published in magazines and do not meet standard criteria for legitimate surveys admissible in court.”

“As someone who has long championed and advocated for the rights of Asian Americans in higher education, I am deeply concerned about 80-20’s position on this issue,” said Dr. Bob Suzuki, President Emeritus of California State Polytechnic University, Pomona. “Based on my experience in higher education for some 33 years, I know that race-conscious policies have provided greater equal opportunity for the vast majority of Asian Americans, not only for students, but also for faculty and staff. As the APAHE and CARE papers indicate, 80-20’s arguments are seriously flawed and must be challenged.”

Last week, the Pew Center issued a national report on Asian Americans which correspondingly found that the number of Asian Americans who believe they are discriminated against under the current admissions policies is extremely low. A majority of participants (61%) believed that being Asian has no impact in collegiate admissions, and most of the remainder (20%) believed that being Asian can be a helpful factor. Only 12% believed it hurts to be an Asian applicant.

The APAHE paper was drafted by APAHE board member William Kidder, who is also the Assistant Executive Vice Chancellor at the University of California Riverside.

The CARE paper was authored by CARE Principal Investigator Robert T. Teranishi, who is an associate professor of higher education at New York University and author of Asians in the Ivory Tower: Dilemmas of Racial Inequality in American Higher Education.