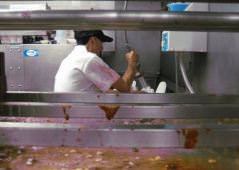 A South Asian immigrant worker from Queens who was subjected to abuse, fraud, and egregious labor violations at the hands of his former employer, a Long Island restaurant, will be speaking at a press conference on April 2 to announce the filing of his complaint against the restaurant and to speak out against the abusive conditions workers from his community face.

Rabin Kumar Biswokarma, who worked as a kitchen assistant, was required by the restaurant’s owners to live an isolated existence in a shared housing unit with his other co-workers. He was paid as little as $100 a week for working 10 hours a day without breaks, and in some instances no pay at all. He was forced to sign documents regarding his pay under protest and to work without medical attention after a job injury.

Biswokarma is represented by the Asian American Legal Defense and Education Fund (AALDEF). His complaint alleges multiple violations of federal and state laws and fraud.

“People must be free to work without being oppressed,” said Biswokarma. “I am filing this complaint because I don’t want other people to be entrapped by these restaurant owners.”

AALDEF Attorney Shirley Lin and Adhikaar Executive Director Luna Ranjit will be present at the press conference to discuss details of the lawsuit.