On Wednesday, Oct. 28, 2015 at 3:30 pm, members and supporters of the Coalition to Protect Chinatown and the Lower East Side will march against racism and displacement from 227 Cherry Street in Lower Manhattan to City Hall. It follows a successful rally and march on Sept. 25 that drew over 1,000 participants.

Since the East Village Rezoning Plan was passed in 2008–protecting majority white wealthier areas and excluding majority Latino, African American and Chinese areas in Community District 3–new luxury development has accelerated gentrification and led to massive evictions. The Lower East Side/Chinatown is now ground zero for the displacement of low-income people of color.

The NYC Department of City Planning (DCP) has failed to protect Chinatown and the Lower East Side from these development pressures. Earlier this year, DCP rejected the community rezoning plan adopted by the Chinatown Working Group, seven years in the making. Coalition members are marching to demand a meeting with Mayor de Blasio to discuss their demands for an end to the 421-a tax abatement, an immediate halt to the Extell luxury tower at 227 Cherry Street, and the adoption of the Chinatown Working Group rezoning plan. 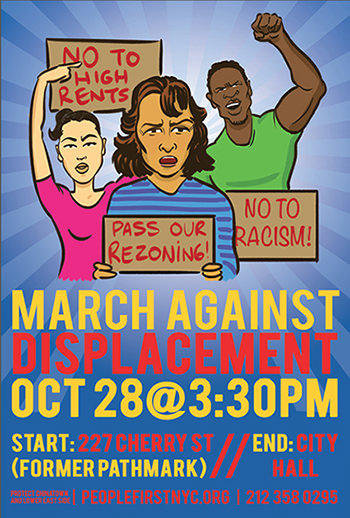