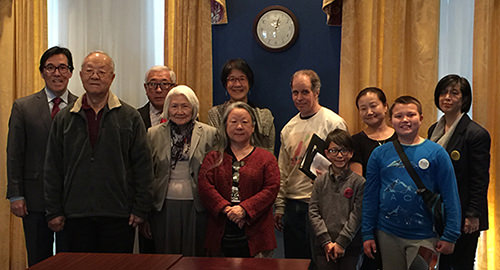 Washington, DC…In what could be the final chapter of the Japanese American redress saga, Art Shibayama and other Japanese Latin Americans (JLAs) will appear before the Inter-American Commission on Human Rights (IACHR) in Washington, DC on Tuesday, March 21 at 8:30 am.

AALDEF Board member and longtime redress advocate Phil Tajitsu Nash attended the Inter-American Commission on Human Rights (IACHR) hearing in Washington, DC on March 21 and submitted an AALDEF statement in support of Art Shibayama, the Japanese Peruvian Oral History Project, and other petitioners in the Shibayama vs. United States case. The IACHR panel discussed the case for 1.5 hours and heard statements from the petitioners. The respondent United States was not present. The verdict will be rendered some time in the future.

In the early 1940s, more than 2,200 people of Japanese ancestry living in Peru and 12 other Latin American countries were forcibly taken to the United States with no notice or due process ­by American soldiers acting on orders of President Franklin D. Roosevelt and his administration. While en route, their identity papers and passports were confiscated, and they were labelled “illegal aliens.” Some were traded to Japan in prisoner exchanges, but most languished in barbed wire-enclosed internment camps in Texas and other states. Their suffering, arguably even worse than that suffered by Japanese Americans–who could at least understand English and were in their own country–was magnified by more injustices after the war.

After decades of legal battles, Art Shibayama and other Japanese Latin Americans finally had their chance to speak to an international tribunal, part of the Organization of American States (OAS), to petition for five things:

(1) DISCLOSURE: Full disclosure of the war crimes and crimes against humanity committed against the over 2,200 JLAs;

(2) APOLOGY: A proper apology, reflecting the severity of these government-sponsored violations;

(4) EXPUNGEMENT: Removal of the words “illegal alien” from the records of the JLAs;

(5) NON-RECURRENCE: Assurance that comparable violations will never again be perpetrated against others.

A reception to learn more about the case and show support for the JLAs will be held at the Chinatown Garden Restaurant, 618 H Street, NW in Washington, DC, from 5:00 to 8:30 pm on Tuesday, March 21.

For more information about JLA cause: https://www.facebook.com/campaignforjusticeJLA/