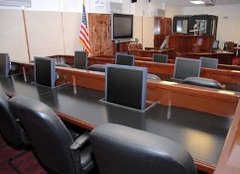 The Asian American Legal Defense and Education Fund (AALDEF) has joined civil rights groups in filing an amicus brief on Nov. 22 in the D.C. Circuit opposing the military commissions in Guantanamo Bay because they discriminate against non-citizens.

“For over a century, the United States has honored the principle that when it comes to criminal justice, non-citizens are entitled to the same rights as citizens,” said Ken Kimerling, AALDEF’s legal director. “Our purpose has been to protect the rights of U.S. citizens, both internationally and at home. That we are currently subjecting non-citizens to a second class system of justice is very dangerous.”

In 2002, President Bush issued an executive order establishing the military commissions at Guantanamo Bay for trying counterterrorism cases brought against non-citizens. U.S. citizens, on the other hand, are entitled to the benefit of either a federal criminal trial or an ordinary court martial for the same offenses.

“We are urging the Court to apply the strictest judicial scrutiny to Congress’ decision to discriminate between citizens and non-citizens,” said Kimerling. “Otherwise, we risk setting a precedent that will prevent us from checking Congress’ power.”

Why Should U.S. Citizens Be Concerned About Discrimination Against Non-Citizens?

Two of the most widespread subversions of U.S. citizens’ civil rights in our history – the Japanese American incarceration and McCarthyism – began with the government discriminating against non-citizens. Laws originally targeting non-citizens led to the incarceration of over 70,000 Japanese Americans during World War II. Likewise, laws that originally restricted immigrants’ rights led to the persecution of thousands of citizens during the McCarthy era.

“In both cases, the discriminatory measures that were first applied to non-citizens laid the groundwork for the government to violate the rights of U.S. citizens on an otherwise unimaginable scale,” said Kimerling. “It is easy to see how the Guantanamo Bay military commissions could have the same effect.”