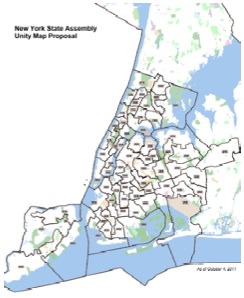 The Asian American Legal Defense and Education Fund (AALDEF), LatinoJustice PRLDEF, National Institute for Latino Policy (NILP), and the Center for Law and Social Justice (CLSJ) of Medgar Evers College have released a new version of the Unity Map with Congressional districts that reflect New York City’s changing demographics and protect the voting rights of Blacks, Latinos, and Asian Americans.

The latest version of the Unity Map also includes a revised State Senate map that takes into account New York’s “block-on-border rule.” All three maps – State Senate, State Assembly, and Congressional — were drawn according to the following criteria: (a) adhere to the “One Person-One Vote” requirement of the U. S. Constitution; (b) comply with the Voting Rights Act; © protect communities of interest; and (d) preserve traditional and emerging neighborhoods.

“The Unity Map shows the New York State Legislature what it can achieve in redistricting if it acknowledges New York City’s growing diversity and keeps communities of interest together,” said Margaret Fung, Executive Director of AALDEF. “They have a once-in-a-decade opportunity to give all New Yorkers equal ability to elect candidates of their choice.”

This week, the New York State Legislative Task Force on Demographic Research and Reapportionment (LATFOR) is expected to release its own district lines.

“It’s critical that these maps be taken into serious consideration,” said Lucia Gomez, Redistricting Advisor to NILP and Executive Director of La Fuente. “Protecting the voting rights of our communities of interest cannot be an afterthought. Our diverse communities continue to fuel the population of this state, and it is imperative that these districts reflect the current reality of the changing face of the State of New York.”

“Because of historical voting discrimination, three New York population groups are protected by the Voting Rights Act: Blacks, Latinos, and Asian Americans,” said Esmeralda Simmons, Esq., Executive Director of CLSJ. “The creators of the Unity Map understand that, during the redistricting processes, many would like to pit one community of color against another, rather than give all protected groups their fair share of representation. Thus, we have created these redistricting maps to prove by example that, by exercising mutual respect for community ties and population shifts, fair redistricting in compliance with the Voting Rights Act can be achieved.”