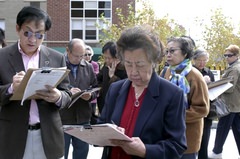 For the municipal elections on Tuesday, November 8, the Asian American Legal Defense and Education Fund (AALDEF) will dispatch attorneys, law students, and community volunteers to monitor and document any voting barriers faced by Asian American voters in poll sites in Massachusetts, including Boston, Quincy, and Dorchester. AALDEF will also conduct a nonpartisan exit poll in Chinese and English on Asian American voting preferences in both Boston and Philadelphia.

AALDEF will monitor at least four poll sites in Massachusetts for compliance with the Voting Rights Act and the Help America Vote Act. Volunteer attorneys will observe the provision of Asian-language ballots, interpreters, signs, and voting materials, which are required in certain districts. We will also monitor the application of voter identification requirements and whether provisional ballots are offered to individuals whose names do not appear on voter lists.

AALDEF will conduct a nonpartisan exit poll of Asian American voters in both English and Chinese. Voters will be asked about their candidate preferences for City Council and the upcoming presidential election. We will also record the number of first-time voters, party enrollment, use of Asian-language voting assistance, and any specific problems at the polls.