On February 27, 2015, Ivy O. Suriyopas, director of AALDEF’s Anti-Trafficking Initiative testified at a New York City Council oversight hearing on labor trafficking of domestic workers and resources available for victims in New York City. Her testimony appears below and can also be downloaded here. 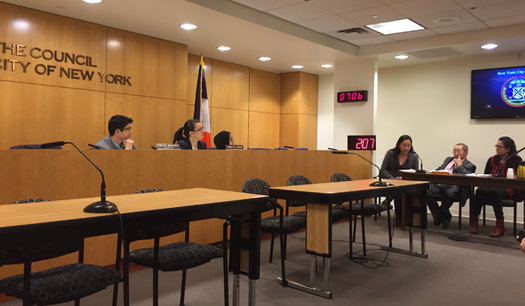 My name is Ivy Suriyopas, and I am the director of the Anti-Trafficking Initiative at the Asian American Legal Defense and Education Fund. AALDEF is a national organization that protects and promotes the civil rights of Asian Americans. By combining litigation, advocacy, education, and organizing, AALDEF works with Asian American communities across the country to secure human rights for all.

Since 2005, I have represented trafficking victims and survivors, including a number of domestic workers, in their applications for T Visas and other immigration relief. I served as a criminal justice advocate as they cooperated with law enforcement authorities in the investigation and prosecution of these cases. Additionally, I have represented victims and survivors as they have sought to obtain economic justice.

Let me paint a picture for you of the types of trafficking cases involving domestic workers I have encountered:

There is the matter of the domestic worker from the Philippines who paid for a job and a better life in the United States, only to find herself having to pay off an alleged debt by working as a domestic worker.

There is the domestic worker from Bangladesh whose passport was taken for “safe-keeping” and who is locked in the household with her employers’ infant nine hours a day.

There is the case of the Indonesian domestic worker who is forbidden from leaving the household and gets paid merely $200 a month for 126 hours of work per week; that translates into roughly to $0.36 per hour.

There is the domestic worker from Bhutan whose employer at the United Nations wields so much influence and power that she fears leaving the household.

And there is the matter of the domestic worker from India who had escaped her trafficking situation only to find another job where her employers refused to pay her overtime and threaten to fire her if she tries to call in sick.

These cases occur far too often and could be prevented if the City takes steps to appropriately identify trafficking. The lack of understanding of the complexity of human trafficking, employers’ unawareness of or refusal to fulfill their obligations to their domestic worker employees, domestic sworkers’ lack of knowledge of their rights under the law, and barriers to accessing public benefits and other vital resources hamper the ability of these laborers to operate in fair and safe working conditions.

As we strive to improve work-life balance, and we rely more heavily on child care, we need to ensure that the workers who care for our children, clean our homes, and cook our food are paid fairly and treated appropriately. New York, home of the United Nations and a number of consulates, should bolster its efforts to protect personal employees – typically on A-3 and G-5 visas – in these households. New York City should be at the forefront of protecting domestic workers.