Determinations for Bilingual Ballots Are Under Threat 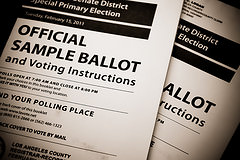 June 18, 2012 — In the latest blow to minority voter participation, funding for the American Community Survey (ACS) is under threat. The Congressional Joint Economic Committee is holding a public hearing tomorrow, June 19, on the economic impact of eliminating the ACS.

The ACS, which replaced the decennial census long form, is an ongoing survey conducted throughout the decade that asks respondents to identify their citizenship, level of English proficiency, and educational attainment. This data is then used to determine the need for bilingual ballots, translated voting materials, and interpreters at poll sites for voters with limited English proficiency pursuant to Section 203 of the Voting Rights Act.

“The ACS is the only way to get specific information about various ethnic groups to determine whether or not counties need to provide language assistance in elections,” said Glenn D. Magpantay of the Asian American Legal Defense and Education Fund (AALDEF), which has conducted multilingual exit polls over the past decade to identify emerging language minority groups.

“The continuation of the ACS is necessary for making meaningful determinations of language assistance under the Voting Rights Act,” said Magpantay. “If funding for the ACS is removed, it will stifle the political participation of the growing number of Asian American voters.”