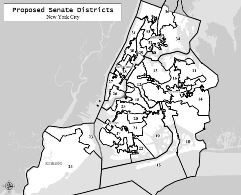 January 26, 2012 — This afternoon the New York State Legislative Task Force on Demographic Research and Reapportionment (LATFOR) released its proposed redistricting maps for New York State Assembly and New York State Senate districts. The Asian American Legal Defense and Education Fund (AALDEF) has been advocating for a redistricting proposal that protects the voting rights of Asian Americans and other communities of color. Together with LatinoJustice PRLDEF, National Institute for Latino Policy (NILP), and the Center for Law and Social Justice (CLSJ) of Medgar Evers College, AALDEF released the Unity Map, a proposed redistricting plan for New York City.

“We’re glad that LATFOR recognized the importance of creating a majority Asian American Senate district,” said AALDEF Executive Director Margaret Fung. “But the contorted district lines of SD 16 split the neighborhood of Flushing. A compact district in Flushing-Bayside should be drawn to keep Asian American communities of interest together in these neighborhoods, as we demonstrated in the Unity Map.”

“As a general matter, we are pleased that LATFOR has increased the number of Asian American majority Assembly districts from one to three,” said Jerry Vattamala, staff attorney with AALDEF’s Democracy Project. He added that a majority Asian American Assembly district has also been created for the first time in Sunset Park and Bensonhurst, Brooklyn.

Under the Unity Map, AALDEF proposed four Asian American majority State Assembly districts, with the fourth in the neighborhood of Elmhurst.

AALDEF will be releasing a detailed analysis of the effects of LATFOR’s proposed maps on Asian American political representation.