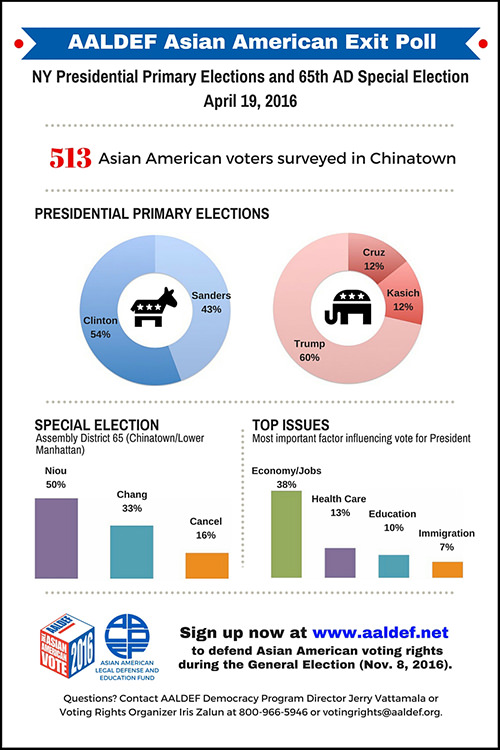 Among all Chinatown voters, Economy/Jobs was the top factor influencing their votes for president (38%), followed by health care (13%), education (10%), and immigration (7%).

The AALDEF exit poll, conducted in Chinese and English, is based on responses from 513 Chinese American voters at five polling places in Manhattan’s Chinatown with large Asian American populations: Confucius Plaza, PS 2, PS 126, PS 130, and PS 131.

AALDEF Executive Director Margaret Fung said, “Given the large turnout of voters in Chinatown on Primary Day, we hope that Asian Americans across the country will make their voices heard by registering to vote and casting their ballots in the November presidential election.”

AALDEF dispatched teams of attorney poll monitors to inspect 18 poll sites, covering 65 election districts in Chinatown and the Lower East Side. Through both the exit poll and monitoring efforts, AALDEF recorded complaints from Asian American voters facing barriers or other problems at polling places.

Other voters in Chinatown complained of their names missing from the voter rolls, not being given an affidavit ballot, rude or hostile poll workers, and being misdirected to the wrong poll site.

AALDEF Democracy Program Director Jerry Vattamala said: “AALDEF worked with the NYC Board of Elections to resolve many issues for voters on Election Day and will follow up with all voters that encountered barriers in voting.”