Vincent Wu’s birthday memories–jailed at Selma in 1965, worked security for MLK at the March finale

At face value, Vincent Wu, 73 years young this week, looks like many successfully retired Asian American engineers. At Atari, the company that brought the world “Pong,” Wu led the effort to bring “Donkey Kong” home–to the home PC, that is.

Remember the floppy disk version? That was Vincent.

But ask him about the real highlight of his life, and he’ll point to his soul and to Selma. 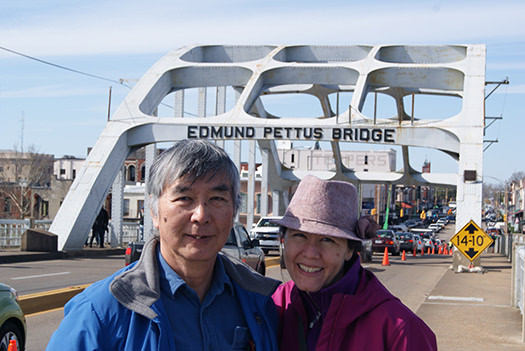 Wu was a volunteer marshal in the historic final march from Selma to Montgomery, where he walked alongside Dr. King as a member of his security team.

At 5-feet 9-and-a-half inches and 155 pounds, Wu said he wore a blue chambray work shirt and jeans, no uniform and definitely not a suit. Only a blue armband made out of plastic, like that of an air mattress, distinguished him as a member of the volunteer perimeter security team. They were never more than 10 or 20 feet away from Dr. King on the march to the Alabama capitol.

“We were jubilant because this was a triumphant event,” Wu told me about the voting rights march. “We were finally reaching our objective, our goal. It was an honor to assist him, to protect him.”

Did King ever speak to him? Wu only laughed. “I’m just a foot soldier,” he said of his days volunteering in the historic march. Wu was a 23-year old in grad school at Illinois in 1965. Like other Americans, he was outraged by the scenes on the TV news from “Bloody Sunday.”

“We answered the call of Dr. Martin Luther King to come down to Selma to bear witness and to stand with the people who were oppressed,” Wu said. “My motivation was for my love of American ideals. It was a moral as much as a political stand for me. I believe in the value of non-violence and respect for every human being. So it stems from a sense of morality and ethics…as a human being…I was there not as an Asian American student but predominantly as an American citizen.”

Wu was a minister’s son born in the Yunnan province, China, but his family made its way to Hong Kong. At the time, the immigration quotas prevented many Chinese from coming to America. But as a minister, Wu’s father was given special passage to the U.S. to serve at the First Chinese Presbyterian Church in New York City.

“We lived in a mostly white neighborhood, one of only two Chinese families in the school,” he said.

When I said it sounded like “Fresh off the Boat,” he laughed. As an immigrant with an accent, he could probably relate to both American-born Eddie Huang and his parents.

From midtown Manhattan, Wu moved to San Francisco, right on the edge of Chinatown, and his education resume was typical for many Bay Area Asian Americans: Francisco Junior High, Washington High, San Jose State. But then came Illinois for grad school, and Selma for activism.

He was one of seven in a VW bus, organized by a Unitarian Church. In nine hours, he was in Selma, the start of what would be two weeks that would change his life.

He didn’t see any other Asian Americans. But he did have a sense of danger.

“We were kind of scared,” he said, reminded of the images of the Selma police and Bloody Sunday. “When we drove through, we did not dally downtown because it was a dangerous place.”

They went straight for the black neighborhoods where they were welcomed, put up in people’s residences in public housing, fed, and treated well.

It was a lot more hospitable than the Montgomery County jail.

As a volunteer, Wu was put to work shuttling other activists from airports to Selma and to Montgomery.

That’s when he encountered the police. Wu was profiled–he was driving while being a civil rights activist.

Wu, who transported activists at the 1965 march, was jailed for one night. He stands at the new facility 50 years later.

“I was stopped by Montgomery police and thrown into jail,” Wu recalled. “I spent one night in the Montgomery jail, due to no cause but just transporting activists…There were no charges, so I was out the next day. One night. But that was my first introduction to grits.”

Shuttle duty was one of the more dangerous jobs for volunteers, as it turned out. As part of the transit team, Wu said he drove the same car as Viola Liuzzo, the white activist from Detroit who was shot and killed–one of the Selma deaths that galvanized activists around the nation.

“You kind of freaked out,” Wu said when he recalled learning of her death. “You felt it could have been you in that car.”

But the volunteer job that was more dangerous was actually being part of the team of volunteer marshals marching with Dr. King.

“We were holding hands, circling around Dr. King. We walked with him from the car to the stage, like that,” Wu said of an unforgettable memory that would fuel his student activism for years. After the marches, Wu continued to drive folks to register in Alabama and Mississippi.

“I remember driving like hell on the back country roads of Alabama,” Wu said.

It was a quite a way to celebrate his birthday month, 50 years ago.

Wu was also active in the antiwar movement and said he was likely the first in San Francisco’s Chinatown to declare himself as a conscientious objector.

“I’m a pacifist,” Wu said. “I truly believe the best way to live life is to seek the truth, create beauty, and live with kindness toward all. Those are my goals. To live humbly and be a witness and, hopefully, be a good example for my children and my children’s children.” 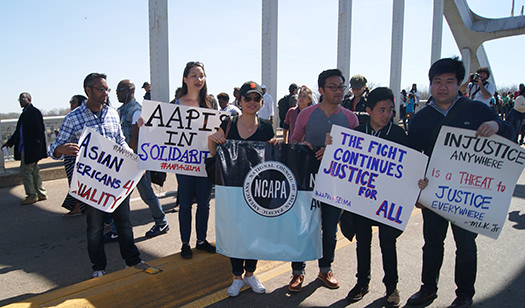 And that’s what struck him about Selma a few weeks ago. There are people following in his path.

In 1965, Wu never saw an Asian American in all that he did at Selma, though there were a few among the thousands of protestors who came for the marches. 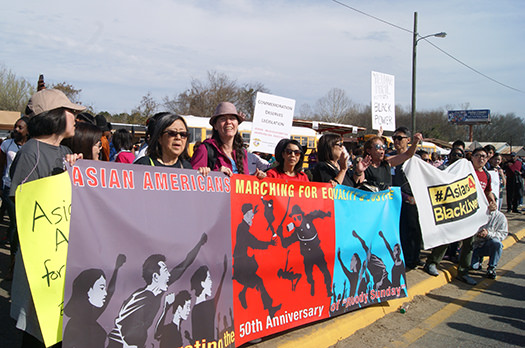 At the 50th anniversary this month, Wu saw real progress just for Asian Americans that dates back to 1965, when the immigration laws lifted quotas and allowed more Asians into America. At Selma 2015, Wu saw Asian American families with three generations of activists. For the first time, Wu met Todd Endo, his wife Paula, and their grandchildren. They stood on the Edmund Pettus Bridge and shared the memory of being Asian Americans at Selma 50 years ago. 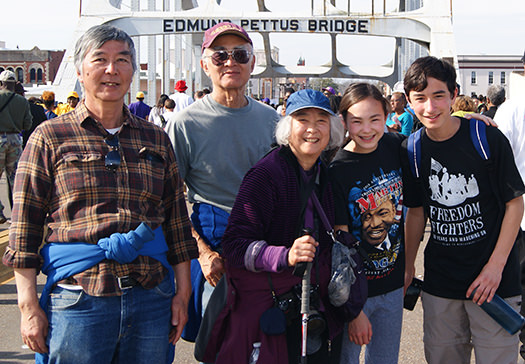 Wu met Todd Endo for the first time this month; Endo was also at Selma 50 years ago.

L to R: Wu with Endo, his wife Paula Endo, and their grandchildren. (Photo courtesy of Vincent Wu)

They were brought together by the young contingent of activists present at the march. Wu is modest about being at Selma in 1965. He could not deny the call he felt. But he’s truly inspired by the response of a new generation of Asian Americans and “their enthusiasm and steadfastness.”

It should give all of us real hope for the future, as the fight for equity and justice continues.