President Obama may not be able to place Merrick Garland on the Supreme Court. But he’s doing what he can in his final days. Like giving the Presidential Medal of Freedom to luminaries like Maya Lin, the creator of the Vietnam Veterans Memorial. 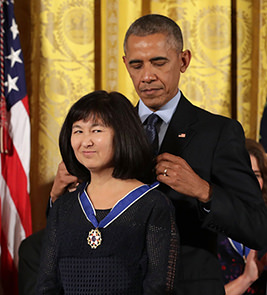 And of course, he pardoned his last turkey the day before Thanksgiving. Actually two, Tater and Tot from Iowa. The president said one will have to be vice-turkey. 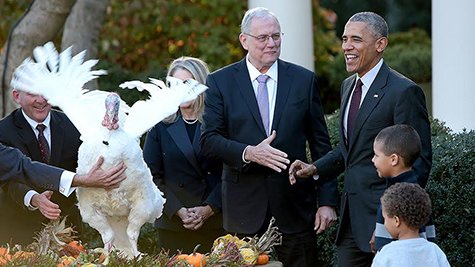 Pardon me. But if Obama really wanted to save some turkeys’ lives, he’d talk about vegetarian options like seitan “birds,” or Tofurkys. An estimated 45 million turkeys will be gobbled up this year.

Not at my house. I’m having round mounds of something that approximates a carcass. Browned vegetable carcass, yum! At least, no animals were harmed.

That’s something to be thankful about. And a bit more humane than the 2016 presidential campaign, which only threatens half the United States of America.

Still, if Obama can pardon two turkeys, can we muster up the holiday spirit to pardon the president-elect? Just at dinnertime?

Trump seems to be trying hard to confound everyone with his actions that seem to confirm that most of his campaign pledges were lies.

The man who inspired cheers of “Lock her up,” now says he’s not going to pursue a special prosecution of Hillary Clinton for whatever cooked-up charges he put in people’s minds during the campaign.

I like the result, but what a great liar!

But what would you expect from the least experienced and least qualified person ever to be elected president.

Trump’s a beneficiary of the White Republicans’ double standard on affirmative action.

So I wasn’t surprised to hear Trump pick one of his former critics, South Carolina Gov. Nikki Haley as UN Ambassador.

They won’t dare fly the confederate flag at the U.N. now!

Haley’s qualifications? Experience? She’s been on a few trade missions, but compare Haley with the current ambassador Samantha Power, and it’s embarrassing. Power, a former journalist and Harvard academic, won a Pulitzer for her book on genocide. With Power, the U.S. had a tough and deep thinker who understands global affairs and the philosophy of moral intervention.

Haley is like Trump, learning on the job. An apprentice. So far that’s the Trump Doctrine.

Haley’s parents are immigrants from India. Nice, but… her stand on the issues? She’s a political conservative on climate change, which means she won’t come out and say humans are responsible for global warming. Don’t expect her to fight for the Paris agreements.

But think of the common good. Someday, you won’t have to cook your turkey or Tofurky with a stove.

You’ll be able to cook it quite well in the naturally unnatural open air.

Haley is the first woman and a person of color officially named to the Trump cabinet. There might have been two Asian American women, with Michelle Rhee, the former head of the DC public schools, on the shortlist for education secretary. But Trump has picked billionaire Betsy DeVos, a billionaire Republican donor from Michigan, who no doubt helped that state turn red.

DeVos is an advocate for school vouchers, where you get money and spend it where you want. Even private schools and charters. That should make conservatives happy. But she’s also a big advocate of “Common Core,” which many conservatives hate. Like most of Trump’s picks, DeVos is rich and white. And again, with no real experience as an educator, only as an activist. Now she has the keys to the education kingdom. Her husband, Dick, is an heir to the Amway fortune. What’s next? Funding schools with multi-level marketing sales on all consumables?

Of course, DeVos is not the name people are waiting to see pop up in the headlines. That would be Mitt Romney, a Trump lambaster, now being considered for secretary of state.

I don’t know what qualifies Romney in the international stage. Organizing the Utah Winter Olympics? The man who lost to Obama is white and wealthy with no diplomatic experience. Indeed, Trump would be showing more diplomacy than Romney by nominating him.

If it happens, it would be yet another Trump apprentice, learning on the job.

But maybe he’s waiting for Black Friday to make that announcement. Or that day could be Ben Carson’s day to be named HUD secretary. What does the brain surgeon know about housing? Yup, he too will be learning on the job.

Last week, I mentioned the appointments of Sen. Jeff Sessions. as attorney general, and Steve Bannon, as chief strategist.

These men unfortunately are not like the other picks so far. They are extremely well qualified to lead the dismantling of civil rights in America. That’s a problem. Big League.

Last weekend, when neo-Nazis were gathering in Washington, you could hear these exuberant phrases: “Hail Trump, Hail our Victory!”

Some even reported the verbs translated to the German “heil,” as in you know who.

These were the words of Richard Spencer of the National Policy Institute, and if you haven’t seen the video of his weekend gathering of neo-Nazis, emboldened by Trump, don’t do it on a full stomach.

You’ll be sickened by his throwback racism, reminiscent of the ’30 and ’40s. And not just in Europe. In California, white nationalists successfully led a movement to exclude Filipinos from the U.S. It was sheer white purity. And it’s all being revived by Spencer, inspired by Trump.

“For us as Europeans, it is only normal again when we are great again,” Spencer said on the video.

And it’s clear he’s not an advocate for diversity.

“America was until this generation a white country designed for ourselves and our posterity,” Spencer said. “It is our creation, it is our inheritance and it belongs to us.”

Well, unless he thinks of us as being on the same team, I’d say we all better unite and denounce this guy. Fortunately, when asked in his New York Times editorial board meeting, Trump was pretty direct about Spencer and his group of white nationalists.

I mean, I’m somebody that really has gotten along with people over the years. It was interesting, my wife, I went to a big event about two years ago. Just after I started thinking about politics.

I’ve never had a person boo me, and all of a sudden people are booing me. She said, that’s never happened before. And, it’s politics. You know, all of a sudden they think I’m going to be running for office, and I’m a Republican, let’s say. So it’s something that I had never experienced before and I said, ‘Those people are booing,’ and she said, ‘Yup.’ They’d never booed before. But now they boo. You know, it was a group and another group was going the opposite.

No, I want to bring the country together. It’s very important to me. We’re in a very divided country. In many ways divided.

So you see The Donald has feelings. He knows half of the country despises him. But he’s new at this. He’s his own apprentice.

Trump can learn a lot from the man he tried to derail on some birther nonsense.

GIVING THANKS TO PRESIDENT OBAMA

President Obama, after pardoning Tater and Tot today, had his own sentimental feelings about being the outgoing president. He listed off some impressive accomplishments: six years of job creation, the longest streak ever. Low unemployment. Wages rising. Inequality narrowing. Housing market healing. The stock market tripling.

Think of the dark economic days of 2008. The president has given us a lot to be thankful for.

Do you have health care when no one would give it to you or your family? Do you have a house that’s right side up after the mortgage crisis. For many Asian Americans in California’s hardest-hit housing markets, Obama’s refinancing programs have helped home owners.

“That’s worth gobbling about,” the president said.

Then he tipped his hat to our country’s great diversity, calling it “the source of our national strength,” and that “out of many we are one.”

“We are bound not by any one race or religion,” said Obama,”but by the adherence to a common creed that all of us are created equal. And while accepting our differences and building a diverse society has never been easy, it has never been more important.”

The president said, “We have to see ourselves in each other because we all have families we love.”

After the campaign he ran, it’s hard to see Trump, the former birther, saying those words.

But let’s hope he learns from Obama.

The president has been the best handcuffed, gridlocked president we’ve ever had.

As we move toward our uncertain future, he’s given us reason to curb momentarily our political anxieties, and be thankful.

We’ve had the last eight years. We’re going to have to fight to make sure we keep moving forward.