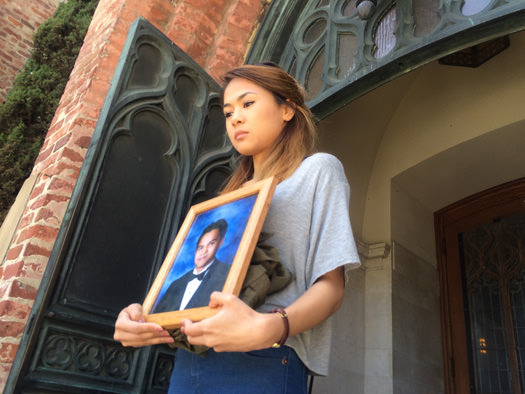 But really, do Asian American lives matter? Not just the super-achieving model minority cubs breastfed from Tiger Moms, but the struggling Asian American immigrants who are seldom heard, hardly seen or even recognized?

I wondered about that when President Obama was in New York for the young men’s support program called “My Brother’s Keeper,” a positive event for the administration to address coincidentally the situation in Baltimore.

I didn’t hear any specific mention of Asian Americans.

But as he spoke, I kept thinking of real Filipino immigrants like my cousin Stephen Guillermo.

In his remarks, the president talked about how words like “equality” and ideas like “liberty and justice for all” had to be made concrete in the lives of all our nation’s children.

“And we won’t get there,” the president said, “as long as kids in Baltimore, or Ferguson, or New York, or Appalachia or the Mississippi Delta or the Pine Ridge reservation believe that somehow their lives are somehow worth less…We won’t get there when there’s communities where a young man is less likely to end up in college than jail…or dead.”

That hit a nerve.

It was the rhetoric of inclusion, and somewhere between Baltimore and the Pine Ridge reservation, I know he probably meant to include the densely-mixed commercial and residential places that Asian American immigrants know, such as New York’s Chinatown. Or San Francisco’s immigrant hot spots beyond Chinatown, the Tenderloin and South of Market districts, where drugs and prostitution are a normal part of the urban landscape.

They are the places where new Asian immigrants live and struggle to get out of, if and when they can.

Stephen lived in San Francisco’s South of Market for almost 20 years since his arrival as a young kid from the Philippines. His parents waited for their visas for twenty years before that. Essentially, Stephen and his siblings were born while “waiting in line.”

In San Francisco, the single room apartment on Mission St. was good enough for the two parents, Stephen, and his two little siblings for a while. But as the kids grew, the parents’ income and opportunities didn’t. And when Stephen’s father died of cancer, Stephen delayed college and worked two jobs to support his family and pay off his father’s debts.

At his father’s deathbed, I talked to Stephen and told him I would be there for him. But he said he had things taken care of. And he did.

Last year, after eight years at San Francisco State, at age 26, Stephen finally had the credits to graduate.

After a night celebrating, he went to his apartment building, but got off on the wrong floor. Since every floor is identical, he went down the hall and knocked at the door of the same apartment on the third floor— not his family’s apartment on the fifth floor.

It was a fatal mistake.

Stephen was shot and killed by a 67-year-old African immigrant, a retired security guard.

The man was arrested, and despite my family’s protest at the Hall of Justice, the suspect was released three days later. 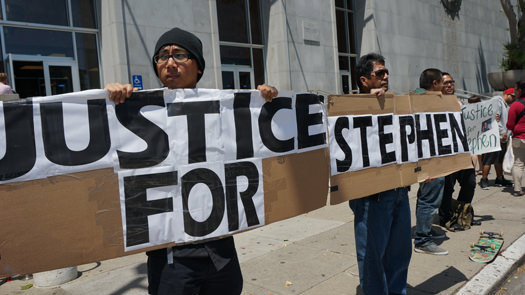 There is a legal theory called the Castle Doctrine that most DAs don’t want to mess with. It’s derived from the idea that your home is your castle, and that gives you the right to defend your home from intruders with lethal force.

It’s a “shoot first, ask questions later” policy that is the basis of California’s self-defense law. And it also gives the shooter the right to presume any intruder is there to cause harm.

But what if he’s like my cousin, smaller than Manny Pacquiao, and no menace or threat, apparently let into the apartment by the shooter and then killed?

When the president spoke on Monday, it had already been a tough weekend.

The family had gathered in San Francisco to see the Pacquiao fight, wanting something to cheer about.

It was the eve of the one-year anniversary of Stephen’s shooting death, and we were hoping for a happy event–a Pacquiao win!

In some ways, it was good that Pacquaio lost the fight; gloom was already in the room.

Though frankly, I scored it 7 rounds Pacquiao to 5 for Mayweather.

I kept thinking about a tax analogy. Your CPA will tell you tax avoidance is fair. Tax evasion is not. The difference is slight, but there is a difference.

Same with boxing. It’s called a fight for a reason. You clash.

The three American judges scored it unanimously for Mayweather.

But when Pacquaio was interviewed afterwards, he thought he had won. Said Pacquiao on Mayweather: “He didn’t do nothing.”

I guess justice is just as elusive in boxing as it is in real life.

When the fight ended, it was gloomy enough for the news I shared with my cousins. After a full year, the DA had yet to complete his investigation.

The medical examiner’s report was not done, and the police report was unavailable because the case is still considered open.

When I talked to the DA’s office, I mentioned how in the state of Montana, prosecutors weren’t afraid to go after a shooter who used a Castle Doctrine defense and actually got a conviction.

Surely, just as DA George Gascon saw fit to campaign last November for a recodification of some laws from felonies to misdemeanors, he’d want to fight for a change in how San Francisco uses the Castle Doctrine?

I was told we’d hear back about the medical examiner’s report in a few weeks.

Every episode brings back a memory of the senseless death of my cousin.

And then there was the president talking about Baltimore on Monday.

He said he saw himself in the young men in the Brother’s Keeper program and said the difference was that he “grew up in an environment that was a little more forgiving. “At some critical points, I had some people who cared enough about me to give me a second chance or a third chance,” said the president. “Or to give me a little guidance when I needed it. Or to open up a door that might otherwise have been closed. I was lucky.”

I wish Stephen had been that lucky. That the door he faced had remained closed. And that his gunman had waited to give him a second chance.

A year later, Stephen would have been a year out of school and who knows where.

He might have drawn some comfort from hearing the president say, “I want you to know, you matter. You matter to us. You matter to each other. Ther e’s nothing, not a single thing that’s more important to the future of America than whether or not that you and the young people of America can achieve their dreams.”

Stephen Guillermo, Filipino immigrant, child of San Francisco’s South of Market, needed to hear that while he still mattered.