Diversity at the movies? Was that Kiyoshi Kuromiya in a few frames of “Selma”?

Among the Oscar-nominated movies of note, mine went off in “Boyhood,” when Mason crashes at his sister’s University of Texas dorm with his girlfriend, and in walks the “sister’s roommate.”

Yup, the Asian American student, who politely agrees to get lost while the others get it on.

It’s the typical role. Compliant. On the margins. Not the one having sex.

Unfortunately, there’s no category for “best minimal presence in a major motion picture.”

Oddly enough, my “AA-dar” also went off during “Selma.”

If you plan to see the movie for MLK Day, or soon after, please go and keep your eyes peeled during MLK’s speech on the capitol steps of Alabama.

Although I cannot verify this with the producers in a complete Zapruder film-like analysis, look at the black and white clips interspersed in the film’s scenes of the big March, the final one in the movie that actually took place on March 25.

There is a non-black face with black hair and an Asian-sized body among a group walking by with signs. It’s a wide angle/side view. They walk by in a flash, but no matter how faint, and for how many seconds, I could sense we were in the presence of an Asian American. 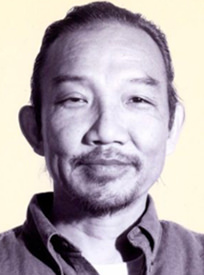 As we honor Dr. King throughout the nation, Kuromiya is one of the Asian Americans among the closest to Dr. King.

In the assassination year of 1968, Kuromiya cared for Dr. King’s kids at the King house the week of his funeral.

If you miss the frames that flash by at the end of “Selma,” imagine Kuromiya on the front lines at the first marches at Selma. He was one of those clubbed by the state troopers in Alabama.

In a Life magazine piece, Kuromiya talked about his role:

I was in the South during the spring and summer of 1965. After Revered James Reeb was killed, we marched and I was clubbed down and hospitalized. When you get treated this way, you suddenly know what it is like to be a black in Mississippi or a peasant in Vietnam. You learn something about going through channels then too. I gave my story to an FBI agent in the hospital. He took seven pages of notes, but I remember thinking at the time it was probably just about as effective as relaying information to the ACLU via the House Un-American Activities Committee. Nothing ever came of it, at any rate.

It sparked Kuromiya’s independence for taking real action, for the public good, and, of course, through non-violent means.

If you want to be a rebel, Kuromiya would be a good role model.

Of course, he already knew what discrimination felt like. He was born while incarcerated by the U.S. in a Wyoming internment camp during World War II.

His family later moved to Monrovia, California, and Kuromiya went on to college at Penn. As a student, he made sure his voice was heard in the biggest issues of the day, the antiwar and civil rights movements.

Like Dr. King, Kuromiya knew that protest and the media go hand in hand. To draw attention to the use of napalm in Vietnam, he staged an event where a dog was threatened to be burned alive on the library steps at Penn. When thousands turned up, they saw Kuromiya’s message: “Congratulations on your anti-napalm protest. You saved the life of a dog. Now, how about saving the lives of tens of thousands of people in Vietnam?”

Later, Kuromiya became a legendary fighter for AIDS research, known as the founder of Critical Path, and a member of ACT-UP.

When you think about Dr. King, remember that the fight was never just a black and white thing.

Asian Americans stood with Dr. King in the common fight for equality.

It may not be always reflected, but if you look hard enough, you’ll find that we had a voice.

Read about my take on the Oscar snub of “Selma” and more of MLK here.